My interest in the prevention of trauma-related paraplegia, paraparesis, tetraplegia, tetraparesis and encephalopathy  dates from Helicopter retrieval during the late 1980s.

From 1987 to 1990, I worked as the Chief Medical Officer with the Westpac Rescue Helicopter Service, flying over 1,000 hours and treating hundreds of trauma and medical cases.

During this time with the Helicopter Service, I also introduced International Retrieval to their capabilities, and became their official representative to Government, the National Health and Medical Research Council (NH & MRC), major sporting bodies including the Rugby League and Rugby Union, Nursing and Ambulance Training Colleges and made numerous television and radio appearances as the “public face” of the Rescue Service.

Awarded a prestigious Churchill Fellowship to study Trauma Management in European Emergency Services in 1989, I was also enlisted in the Royal Australian Air Force Specialist reserve and had the opportunity both here and abroad to review Acute Spinal Injury Management.

My focus on the prevention of paraplegia, paraparesis, tetraplegia, tetraparesis and encephalopathy  was prompted both by the number of these injuries I would see (in one notable weekend, 3 separate neck injuries from football) and a growing realisation that pre-hospital education in this area was sadly lacking.

As a doctor, I had received almost no specific instruction in handling head and neck patients, and the equipment available at the time was rudimentary. I became more involved in responses to the scene of accidents, and was disappointed at the lack of consistency in ambulance officer education in these skills and the varying levels of awareness and application of spinal injury prevention principles.

In a landmark study in Victoria in 1988, Dr. Joe Toscano found that almost 25% of all admissions to a major State Spinal Unit over 18 months suffered an increase in the severity of their SCI after the initial collision, fall or incident and before arrival at a Spinal Unit. These findings alarmed many, particularly those in the paramedical and ambulance fraternities, and spurred me to write a book specifically designed to address Secondary Prevention .. accepting that these injuries would still occur despite road safety advances and education regarding football and water sports.

In 1990 I published a “Guidebook for the Management of Acute Spinal Injuries” for medical and rescue personal, as well as lecturing locally and Internationally on this topic.

A video education programme was made with the assistance of the NSW Rugby League called “NeckSafe” based on the NeckSafe Lecture Programme I had initiated to spread the Secondary Prevention message.

In association with Dr. John Yeo, one of the most respected advocates of prevention of paraplegia, paraparesis, tetraplegia, tetraparesis and encephalopathy  in Australia with whom I worked closely, I was also involved in the development and field testing of new devices for the Acute Management of Spinal Injuries such as the Russell Extrication Device (R.E.D.) and the growing range of equipment such as scoop stretchers and head immobilisation devices.

The priorities of resuscitation have always been “ABC”: Airway, Breathing and Circulation, and if possible these should be supplemented by the words “with adequate cervical spine control”.

Paraplegia, paraparesis, tetraplegia, tetraparesis and encephalopathy in the aquatic environment is often associated with beaches in Australia, the most common scenarios being that of the individual being propelled head-first into the sand in shallow water by the force of a wave (“dumped” by the wave), or a mistimed or misjudged head-first plunge into shallow water, a sand-bank or submerged rock, with attendant flexion and rotation of the cervical spine. Aquatic cases also occur in still water, in pools, rivers and dams with the sufferer diving head-first into water of untested or underestimated depth.

Whilst working on a new International Surf Sports circuit, “Oceanman”, I developed a new technique for the Acute Management of Spinal Injuries in the Aquatic Environment, the NeckSafe Aquatic Spinal Management Technique, based on a supine “eyes upward” approach and utilising additional spinal stabilisation equipment such as semi-rigid collars, floating rescue stretchers and spinal board This technique can be applied to both the surf and still water scenarios mentioned above, and in the former case is appropriate for the patient at the shore-line or in deeper water. It is also appropriate for both conscious and unconscious patients, and makes provision for the airway to be maintained at all times with safety and the patient’s face to be continuously observed.

In 1997, our company, Immediate Assistants, became a Registered Training Organisation (RTO) under the Australian National Training Authority (ANTA) guidelines, and registered NeckSafe as a formal course with National Training Information Service (NTIS) Code 15610NSW. This was the first time a specific course dealing with the Acute Management of Spinal Injury had been registered in Australia.

In 1999, the NSW Sporting Injuries Committee provided a Grant to increase the dissemination of the NeckSafe courses, and in that year alone, over 400 sports trainers, physiotherapists, lifeguards, doctors and First Responders received initial or recurrent training in this field. This Grant was renewed in 2001 for a further year, and now in excess of 1,000 participants have gained competency in NeckSafe.

Over the next 4 years, NeckSafe became firmly entrenched in the minds and on the agendas of all those associated with pre-hospital care. We have continued the development, refinement and delivery of this program, and are credited as the industry leading trainers of Acute Spinal Injury Management. Our efforts over the past 15 years have prevented numerous SCI’s, making what we have achieved well worthwhile.

Outcome Research on students of NeckSafe has shown that not only do they increase in the competencies required to handle a SCI patient in the acute setting, but their confidence increases too.

More recently, the focus on head injuries and concussion in sport has led to the creation of the HeadSafe Education Programme (www.headsafe.com) with both online and face-face training under teh NEcksafe banner. 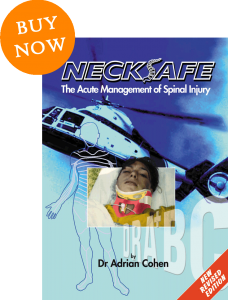